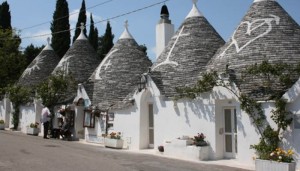 I am asked a lot about places to go, things to do, restaurants to eat…
Alberobello is a town (well the original part) that is constructed almost entirely of trulli, and if you are on holiday here in Puglia for the first time, I guess it is one of those things you must do. I find it a bit touristy, but there are some nice restaurants and interesting sights and objects to be found. And it really is unique!
I came across this interesting article from The Independent, that tells the story (well, one of them) of how and why these buildings dominate the area.

Trail Of The Unexpected: Rooftop charm in Alberobello, Southern Italy
By Adrian Mourby
Saturday, 11 July 2009
My first trullo was above Fasano. I’d just climbed 990 feet from the Puglian coastal plain with its large box-like masserias and suddenly there it was, a round whitewashed structure with a circular tiled roof topped off with what looked like a stone chess piece.
The trulli of Puglia are remarkable structures, their curious Hobbit-like design a result of an equally curious history. In the 16th century this upland area was a fiefdom belonging to the Counts of Conversano, a branch of the Acquaviva family who held baronies all over the southern part of Italy. The family turned a blind eye to farmers constructing homes up here until the day that someone informed the king of Naples, who drew revenue from each building erected on his feudal territories.
Rather than have to pay royal taxes, the Conversanos demolished every house. Now with a lot of homeless peasants on his hands, the story goes that Count Girolamo Acquaviva agreed his people could build again, providing their houses could be pulled down as soon as word was heard of tax inspectors on the road. Thus a style of building was created in which coned limestone structures were put up without mortar so that they could be quickly pulled apart if the need arose. The locals called these houses trulli from the Greek word tholos, meaning ‘dome’.
I passed many more 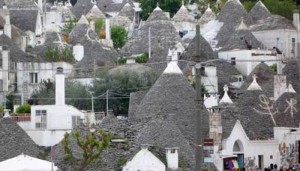 of these structures en route to Alberobello, a settlement on two hillsides that is the centre of trulli construction. Alberobello grew up in the 18th century but was rarely marked on maps. Because the Kings of Sicily – who controlled this part of Italy’s southern mainland – insisted that all new towns and villages had to have royal blessing, and because the Acquaviva family had no intention of shelling out for such endorsement, the village was designed to disappear in a day should the need arise.
Eventually such a life of uncertainty got to the people of Alberobello and they petitioned their king in 1797. Ferdinand IV granted Alberobello freedom from its feudal lord and finally the villagers could start planning for the future.
Trulli dominate Alberobello, dome after stone dome rising like some discarded design for Hobbiton in the film version of Lord of the Rings. The town’s two hillsides are quite different. Rione aja Piccola is at the top of a flight of steep steps and is the commercial centre of the village. Rione Monti on the other side of the valley is more residential, but also more touristy, with school parties weaving in and out of the galleries and shops that line its sloping cobbled streets.
Halfway up Piccola stands the Museo del Territorio, a big baggy structure created by merging 15 trulli. Quite a few dwellings in Alberobello are composites of two or more trulli, but this gets the prize. It was bought by the municipality in 1986 to be turned into a celebration of all things trulloid.
From here I lost myself in the back street. I came across the Trullo d’Oro restaurant – cucina tipica nell’intimatà di un trullo – and made my way up Corso V Emmanuele to the Trullo Sovrano, which was a priest’s house constructed out of 12 little trulli clustered round a big double-vaulted central trullo. The priest for whom it was built was Cataldo Perta, known in the village as Pope Cataldo because of the comparative luxury of his composite accommodation. 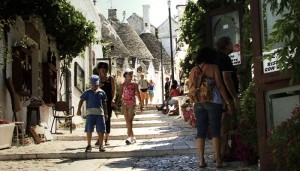 Trullo Sovrano is open to the public so I paid €1.50 to look around. Inside it was a sequence of unremarkable circular rooms but the front bedroom had a feature I’d never seen before: an oblique peephole for shooting at visitors should the sleeping priest be disturbed in bed by anyone he did not like.
Across in Rione Monti, I found an excess of tourist tat. The one place that stood out was Anna Maria Matarese’s shop in Via Monte Pertica which sold novelty fischietti. I’d been seeing traditional fischietti all over Puglia. These elaborately painted pottery whistles often take the form of a cockerel. Anna Maria’s approach is different: she commissions artists to make satiric fischietti. Here were rows and rows mocking the professions and plenty of politicians in bed with each other, but my favourite was a very blowsy Italian family moving house with the mattress strapped on to the top of their tiny Fiat. It was about the size of a wedding cake and still functioned as a whistle if you turned it round.
But my main find was back in Piazza del Popolo. Casa d’Amore was built by the first mayor of the newly established town in 1797. Francesco d’Amore used mortar to construct a revolutionary two-storey dwelling with a balcony to show the people of Alberobello they no longer had to build in the old impermanent way.
Funnily enough, Casa d’Amore looks rather like an unusually tall trullo with a balcony and – despite a plaque exhorting the people of Alberobello to build free, the village didn’t stop constructing trulli. Feudalism might be dead but there was a house style now.

In the Air – Trullo Adagio

Is Puglia the new Tuscany?

Where have the sheep gone? Masseria Marangi

After a focaccia lunch… a walk along the Adriati

My first ‘Italian” gin… in a mug! Gin Giust

In the hills of #alberobello with @millenaridipugl

A walk in the hills around the #trulli town of #al

I didn’t plant these but very welcome! #trullo #

Communion on the steps of Collegiata di Santa Mari

Butterflies hovering over the walkers in #martinaf

This olive tree is over 1000yrs old! #olivetree #o