A lot of guests comment on how lovely ‘Ceglie Messapica’ is. And to be honest I’ve quite neglected the town on this website. But I’m about to correct that! 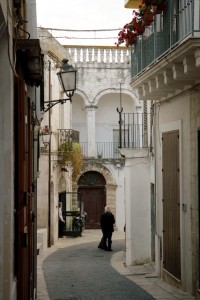 According to legend, it was founded by the Pelasgi, to whom belonged the megalithic structures known as specchie*. After the arrival of Greek colonists around 700 BC, it received the name of ‘Kailìa’ (Καιλία). Nearby the village were extraurban sanctuaries dedicated to the God Apollo (near the modern church of San Rocco) and Venus (on the Montevicoli hill).
*Specchie are monuments laid out in a circle and built entirely with dry stones.

The city was the military capital of the Messapi (the civil capital being located in the nearby Oria), and fought against the Greek Taranto in the latter’s attempt to gain a passage to the Adriatic Sea. The Messapic Ceglie had some 40,000 inhabitants. In Roman times it was already decaying, and in the Middle Ages was a small village known as Celie de Galdo, with a little castle. After several minor families, in 1584 its fief was given to the Sanseverino family, who enlarged the castle and founded two convents for the Capuchines (now disappeared) and for the Dominicans.

Since the 90s the town prided itself on being “town of art land of gastronomy” which is recognized throughout Italy, so has now been identified as the “Gastronomic centre of Puglia.” This title is fully deserved so beware… if you plan on eating out every night weight gain is inevitable. Anti-pasti +1 more dish is enough!

Matera: A View from the Sky

A trek in the Cisternino Hills