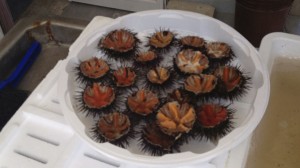 Ricci are a pugliese delicacy. Very seasonal, spring is the time when crowds of locals gather around Pescherias on the coast.

I met a friend further south near Galipolli called Lido Conchilie. Sunday lunch… and it was absolutely heaving. We qued for well over half an hour to grab a table… but it was well worth the wait. A plate of Ricci appeared with bread and all you do is dip the bread in to the Ricci and mop up the roes. It tastes like… I don’t know really, just really fresh… the sea. Perhaps oysters is a close comparison. 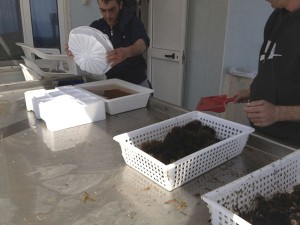 These pictures were taken at Torre Canne. I popped by on my way to the airport for one last go. Not much else was open. A couple, who had their kids in a car eagerly waiting for lunch gave me a roll to mop up the ricci. Very kind!

Above is an Iphone movie of them preparing the ricci at Torre Canne and below a package from BarlettaNews24, where a chef prepares spaghetti with Ricci.

Matera: A View from the Sky

A trek in the Cisternino Hills